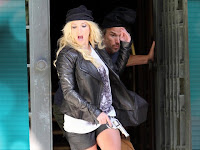 Britney Spears has been a very busy girl. In between preparing for her massively successful Femme Fatale Tour and spending time with her children, the pop diva has done over a dozen interviews with various UK press outlets this week. A lot of the questions have been things we've heard Britney answer time and time again, but I perked up when someone finally got the concept for her new video out of her. "Criminal" is the fourth single off of Spears' hit album Femme Fatale, and she has been very hush-hush about the way she plans to bring the song to life on screen-- until now!

According to the Grammy winner herself, the storyline will reflect the lyrics of the song in telling the story of a girl in love with someone who is maybe not so good for her. "It's about a girl in upper society, and her life and the way she lives her life is totally different from the person that she's in love with," Spears told UK ITV1's This Morning. "It's about bringing those two totally different characters together." Sounds like a modern day Romeo and Juliet, but will it end the same way that tragic love story did? Spears isn't telling, but if the song lyrics are any indication, that may be the case. At the end of "Criminal", Spears laments that even though no one approves of the man she loves, she's sticking with him anyway ("I hear people talk / try to make remarks / keep us apart / but I don't even hear / I don't care").

One of the most exciting and fun things about being a Britney fan is her exciting music videos. While a lot of artists just kind of sing along and look pretty, Britney's clips almost always have an interesting storyline, fantastic set design, and beautiful costumes. Not to mention that Spears has always had major creative control over every aspect of the filmmaking. In 1998, she was just an unknown singer about to record the video for her first single "...Baby One More Time". The director, Nigel Barker, suggested that they turn Britney into a cartoon superhero, but she had other ideas. The then 16-year-old suggested the now iconic schoolgirl concept that fans are still copying today. "Baby" didn't have half the story in it that the song "Criminal" does, so this really should be one of her best music videos yet, and I couldn't be more anxious to see it.