Britney No Apologize For Criminal 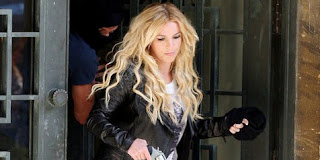 Britney has finally broken her silence regarding controversy surrounding her "Criminal" music video. The 29-year-old beauty issued a statement on Monday, September 26, and from the sound of it, she apparently is not sorry because she believes she just acted out "a fantasy story."

The "Till the World Ends" singer was criticized by London's Hackney Council for carrying a gun when shooting the crime-themed music video in the Hackney borough which was wounded during the riot over the summer. She was asked to apologize, but she refuses to grant the request and insists that what she did is harmless.

In a defensive statement, Britney's camp said, "The video is a fantasy story featuring Britney's boyfriend, Jason Trawick, which literally plays out the lyrics of a song written three years before the riots ever happened."

When voicing their anger towards Britney last week, the politicians did mention that "it is only a music video". They, however, pointed out that "it's images like this, with popstars glamorizing gangs, which means that some young people... get drawn in." They added, "Britney should really know better."

Just a few days before the protest arose, Britney herself said that she was happy with the video concept. "It's a really cool storyline," she gushed. "It's about a girl in upper society and her life, and the way she lives her life, is totally different from the person she's in love with. It's about bringing those two totally different characters together and what happens."