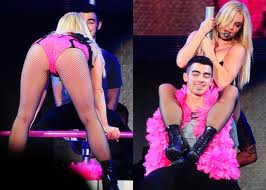 Promoters for Britney Spears's current tour have been criticised for reducing ticket prices. The singer slashed the price of tickets for her UK 'Femme Fatale' shows last month due to low sales and managed to shift more than 5,000 extra passes.

Voucher websites Groupon and Travelzoo offered reduced tickets for Spears's Manchester, Birmingham and London shows, offering the passes for half the original price of £62.50. However, while festival organiser Melvin Benn has said that the emerging trend "undoubtedly works", other promoters have branded the tactic "incredibly damaging", reports BBC Newsbeat.

"We are starting to see a few more pop events being promoted," Rene Freling from Travelzoo explained. "Promoters are thinking, instead of shows being 90% sold out, they'd rather have it full and promote it to a wider audience." Benn, who organises Reading and Leeds festivals, said: "It's been demonstrated to work and works particularly well for an awful lot of concerts.

"It's definitely emerging. In tough economic times people will look at varying ways of pricing their tickets." The festival boss insisted that he would not use the same methods to sell out his own events though as "people would come to expect it year on year".

He added: "It would damage the viability of the festival in the long-term." Independent promoter John Rostrum, who recently held the SWN festival in Cardiff, said: "I would never use a discount site. "To start discounting for me would seem horribly wrong. It's very short-term. It's incredibly damaging for shows because in the future when a show goes on sale people will sit back and go, 'I won't buy until the week before'."

Britney Spears will continue the UK leg of her 'Femme Fatale' world tour in Newcastle on November 3.