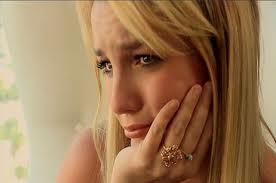 Britney Spears expressed her condolences Tuesday (October 25) to the family of a fan who died after attending her concert Monday in Dublin, Ireland.

Siobhan Healy, 31, was on a fairground ride called the Tip Top outside the concert venue when she was thrown to the ground and killed instantly. According to the U.K.'s Daily Mail, Healy had attended Spears' concert earlier in the evening at the nearby O2 arena.

"I was saddened to hear of the tragic accident in Dublin," Spears tweeted Tuesday. "My heart goes out to the family. --Britney" A family friend told the paper that the accident has devastated the residents of Healy's hometown of Willsborough. "The community is very shocked," Michael McGreal said. "I know her family very well, we are all very upset."

An investigation has been launched to find out what caused the accident, with some speculating that the recent severe weather that has swept through Ireland might have been a contributing factor. Kenneth McFadden, the owner of the company that runs the Tip Top ride, also expressed his condolences. "We can't say [what happened], it all happened so quick," he said. "We are just in bits at the moment, we are just devastated." McFadden also told the Daily Mail that he has had the Tip Top ride for nearly five years and never experienced any problems with it.