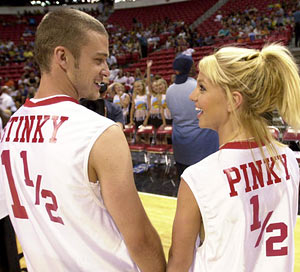 Justin talks Britney Spears on Playboy interview reveals he "absolutely" smokes weed, and also shows the 'Friends With Benefits' star jumping to the defense of ex-girlfriend and pop princess Britney Spears.
During the interview, the singer-turned-actor was asked about the criticism surrounding Spear's current dance moves and he became defensive about his former flame.
"I don't have too much to say about her situation. I can't remember the last conversation I had with her," he said. "But this thing that happens online bothers me -- these anonymous commenters."
He urged those talking trash about the singer to put their money where there mouth is, so to say.
"People think they can say anything and it doesn't matter to people," he said. "I'd love to see the people who comment about Britney online say those things to her face, because they couldn't."
"The internet is a cruel place. What a f--ed-up thing to do," he added, when told about the "dance-off"video comparing Spears' current dance moves to those of her earlier performances (like 'I'm a Slave 4 U' and 'Me Against the Music').
He also said that a 30-year-old performer isn't always going to be able to dance like someone in their teens or early 20s.
"In Britney's defense, if you pulled up a video I did from 2003, I couldn't do the sh-t I did then either."
(PopEater)