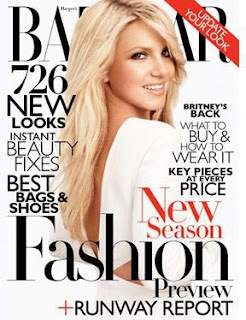 Britney Spears graces the latest cover of Harper's Bazaar and in the accompanying interview, she talks about her upcoming tour, her biggest fashion mistake and why she thinks Justin Bieber is adorable.

When asked about her new album, Femme Fatale, Spears revealed, "I've worked so hard on this album, so it's really refreshing. I feel like I'm drinking a tall glass of homemade sweet tea on a really hot, beautiful day."

The 29-year-old singer also talked about her Femme Fatale tour. "I love to dance, so it's very exciting. The tour rehearsals have been going really well. I think it will be my best show yet."

More excerpts after the jump.
On her biggest fashion mistake:
"Ten years ago at the Billboard awards, I wore this orange hat and orange bra and orange booty pants and purple fishnets. Oh, and I had an orange jacket on. I actually thought I looked hot at the time. But, um, I definitely stood out. I thought it was just a marvelous idea to wear this purple and orange outfit."

On Justin Bieber:
"I think he's adorable. I just saw his movie, and I really didn't realize how big he was. He's enormous; he's just Mr. Man. A lot of the movie is really similar to what I did when I was starting out. I did a promo tour for a year, going into radio stations and all that. It was so cool to see our similarities."

On what she's learned from Madonna:
"I guess she's really taught me to stay true to myself. That seems like a simple thing to say, but she taught me through action, not just by saying it. There are so many people around you that have opinions, but you just have to listen to your instincts."

On being a judge on 'American Idol':
"That would be awesome. I wouldn't be a tough judge, though."