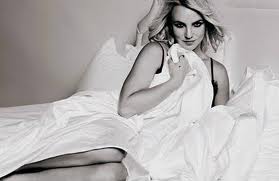 Britney Spears has urged teenagers to go out and let their hair down after admitting she forfeited a conventional childhood for the sake of her career. The singer and actress found international fame at the tender age of 17 when debut single ‘…Baby One More Time’ pushed her onto the world stage, but despite enjoying a successful recording career she admits her grueling work schedule resulted in her missing out on all the fun aspects of teenage life.

“Have fun," she told Glamour magazine when asked what advice she would give to aspiring young singers. "I was having fun then, but I would stay true to that, you know? I'm still pretty much the same person I was when I started this, but in the beginning, I think I was fearful. So I'd say, just try to embrace moments more. To have a good time with life and don't take it too seriously."

Having worn numerous raunchy outfits throughout her colorful career, Britney - who celebrates her 30th birthday on December 2nd - admitted her all time favorite is the controversial school uniform she wore for her very first video shoot in 1999.  "My all time favorite outfit? Probably the school uniform," she said. "I think because it was my first video I ever did and the first experience with everything. That's in the Rock 'n' Roll Hall of Fame."
at 12.9.11