We Got Joe Jonas 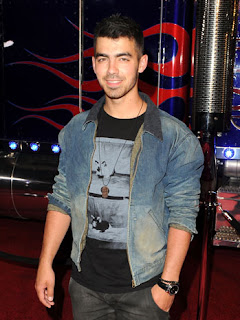 Jonas tweeted on Friday that he will be opening for the pop singer on the Aug. 5 stop in New Jersey. "This just in ... I will be performing at @BritneySpears concert in NJ on Aug 5," Jonas wrote.
It shouldn’t be a surprise that he would perform on that date: He, along with his brothers, are Wyckoff, NJ natives. MTV reports that Jonas had been rumored to be an opener for Spears earlier this year -- and at least for one date, that rumor seems to have turned out to be true. Recently, it was announced that MTV's Jersey Shore star Paul "DJ Pauly D" Delvecchio would be appearing on several dates during Spears' tour. Nicki Minaj is among the openers on the tour. Jonas also announced on Friday the release date of his upcoming solo album. "And get ready for #FastLife in stores Oct. 11," he tweeted. Fast Life, which marks Jonas' debut disc (outside of The Jonas Brothers), was originally slated for a Sept. 6 release.