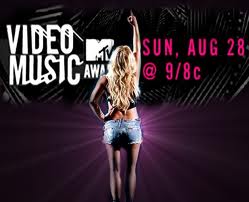 Britney herself told us that her bombshell kiss with Madonna in 2003 is her favorite VMA moment. "My greatest experience -- probably being with Madonna," she told MTV News. "The kiss was amazing. ... Being onstage with someone of that caliber is just iconic."
But Spears certainly has a long list to choose from. And with that track record, it's no surprise that this year's VMAs will pay tribute to Britney. Let's dive into the highlights of her decade-plus history with the show:
1999
For her first-ever appearance, Spears not only went dress shopping with MTV News correspondent Serena Altschul, but also declared herself a VMA pop princess, taking the stage alongside 'NSYNC to perform her breakout hit " ... Baby One More Time." Still the epitome of a teen-pop sensation, Spears performed with a school backdrop, a callback to her video for the track.
2000
Spears upped the sexy ante when she literally did a striptease at the show. She cooed her way through the Rolling Stones' "Satisfaction" and then -- boom -- it happened: She ripped off her tux to display a nude two-piece getup and shimmied her way through "Oops ... I Did It Again."
2001
Just one year later, not only did the singer give Jamie Foxx a dance lesson to Chuck Berry's "You Never Can Tell," but she also hung out with Rolling Stones frontman Mick Jagger on the red carpet, who appeared not to know who she was. "Am I a Britney fan?" Jagger pondered. "Of course I am. And she did one of our songs, didn't she? She did it very well."
2002
Brit donned a dominatrix outfit and presented idol Michael Jackson with a birthday cake and referred to him as the "artist of the millennium." Michael may have misunderstood and thought that she meant he was receiving some new Artist of the Millennium award and gave an acceptance speech.
2003
Here it is: Britney's favorite. She, along with queen Madonna and peer Christina Aguilera, opened the show with striking dance moves and star power. But things really heated up during a wedding-themed performance of Madge's "Like a Virgin," when Madonna leaned in for a quick smooch with Christina Aguilera and then an even-steamier kiss with Spears. Everyone was surprised by it -- including Justin Timberlake. She later told CNN, "I didn't know it was going to be that long and everything. ... I've never kissed a woman before."
What's better than Britney, Madonna and Christina kissing? Cats re-enacting the smooch!
Apparently, the three-way kiss struck a major chord with music fans around the world, who just voted it the most outrageous moment in the show's long history.
2006
Spears appeared on the show in a way fans had never seen her before: pregnant. The mommy-to-be (Jayden James was on the way) pre-taped a segment alongside then-hubby Kevin Federline to present the award for Best R&B Video.
2008
Spears took home her first Moonman -- actually, she took home three, for Video of the Year, Best Female Video and Best Pop Video, all for "Piece of Me." She also displayed her funny bone in a video that opened the show, making us all laugh alongside Jonah Hill. "I just want to dedicate this to all my amazing fans out there for all their support," she said when she took the stage to accept one of her many Moonmen that night.
2009
The show landed back in New York City, and Spears was up for seven awards. She took home the prize for Best Pop Video for her Joseph Kahn-directed clip for "Womanizer."
2011
After taking a break in 2010, we come to this Sunday, where a Spears tribute is set to take place and the singer is up for two Moonmen, including Best Pop Video and Best Choreography. Will she add any more hardware to her collection? You'll have to wait and find out. But we are betting on one more memorable moment to add to her stellar VMA history.
at 26.8.11