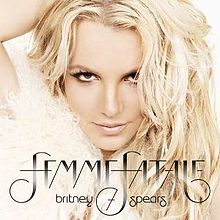 According to MTV.com, It was an incredibly tight race right up until the very end, but only one album could be named your Favorite Album of the Year (So Far)! And the winner is … Femme Fatale by Britney Spears.
When we say things were close, we mean it: As of yesterday afternoon, when we last checked in on the polls, Lady Gaga’s Born This Way was leading with a slim 2 percent lead over Brit Brit. But Miss Spears’ fans came to their diva’s rescue and she persevered in the home stretch, pulling ahead of Lady G by a full 5 percent.
Gaga and Britney left everyone else in the dust. The two accounted for over 85 percent of the total vote, leaving Beyonce’s latest, 4 (which, in fairness, we should note was only released this week), to grab just under 10 percent of the remaining votes. Adele, Bad Meets Evil and Chris Brown split what was left pretty evenly, with each album pulling in less than 2 percent of the vote.