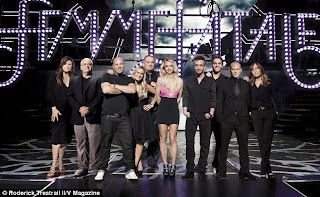 Queen B has been looking fairly trim these days, so it's not as if the V shot is a tremendous diversion from her usual look--at least, weightwise. The photo does have an odd look to it, though. Compare for yourselves--here's Spears in September, just a short while after the V shoot was reported to have taken place.
V had no comment at the time this blog was written as to whether or not the photo had been altered. The issue with Spears will hit newsstands Thursday. To view more photos, visit the magazine's site.
What do you think? Is this photo simply Spears at her slimmest, or do you agree that it's a work of Photoshop art?

Even though her record label confirmed that Brit Brit's taking a little break in 2012 to spend some time away with friends and family, that doesn't mean that the pop princess isn't keeping us entertained in Spearit.
Three years ago, K-Pop sensation BoA came Stateside to release her English language self-titled pop debut, including a bouncy little Bloodshy & Avant-produced track, "Look Who's Talking Now," which is one of the songs that had fans buzzing most. Why? A little co-writing credit by the one and only Miss Britney Spears.
Cut to almost three years later, and voilà! The original demo by Miss Spears has made its way to the web. Written around the time of her fourth studio album In The Zone, "Look Who's Talking Now" sees Queen B in full girlish emancipation mode: "Fast cars and bubble baths/High heels stepping on the gas/Yeah, they're looking at me," Spears taunts on the bouncy, bubbly pop number. And don't forget that extra sass: "Controversy is all they want," she purrs later on. Oh my God, that Britney's shameless! 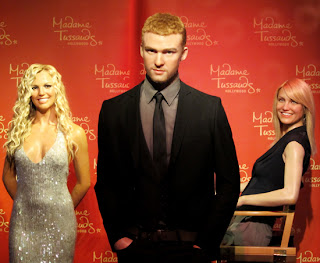 Justin Timberlake may be engaged to Jessica Biel, but he has a long list of beautiful ex-girlfriends which include Britney Spears (in her heyday) and Cameron Diaz. So, it must get crowded in Hollywood for Justin sometimes. Fortunately, the "SexyBack" singer always manages to keep his cool. Madame Tussauds Wax Museum in Hollywood obviously has a quirky sense of humor because they put their Timberlake wax figurine on display in front of their Spears and Diaz figurines. And, that look on wax-Timberlake's face is precious. Would that be the real look he'd have if he was ever stuck in the same room with only Spears and Diaz? Probably.
All three figurines are well done, but Britney Spears' is spot on. Unfortunately, Cameron Diaz's falls short and Justin Timberlake's looks a little too meaty. Overall, it's a well done and well thought out display. Now, if only Madame Tussauds could create a Jessica Biel one with a scowl on her face. That would be priceless.