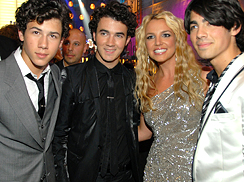 "The first CD that I ever bought was Britney Spears," Jonas told me the other day while promoting "See No More," the first single off his upcoming debut solo album. "It was at a 7-Eleven and I was like, 'Can I get this?' It was literally her EP and I picked it up and, of course, I fell in love with her. It was an early crush for me."
How serious was the young Jonas' crush? Well, he had a poster of Brit on his bedroom wall. "It was the innocent looking picture," he said with a smile. "I think she was in a pink T-shirt."
Jonas said his camp was talking to Spear's about hitting the road together for her Femme Fatale tour "At one point we were considering that," he said. "But they wanted to go with an all-girl tour, which is really understandable. Nicki Minaj is fantastic. So I have a couple of other options this summer that are looking pretty good. Nothing's really confirmed yet, whether it's going to be supporting someone on tour or just going out solo." (E-online)
at 17.6.11