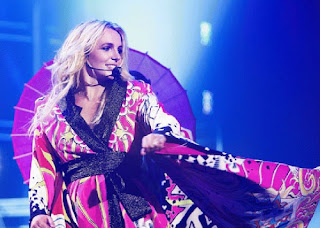 During previews for the concert, it was revealed that Britney’s Femme Fatale show is based around a mysterious sort of action-adventure theme, beginning with a video of Britney being chased by police (“The game of cat and mouse”) and with the set changing throughout the show to reflect Britney’s many different identities. There are also costume changes to match—nine in all, supposedly—including an over-sized angel outfit, a kimono, and a leather motorcycle-gear getup, specifically for her “S&M” performances. “I think the show is more me than anything I’ve ever done,” says Britney. So at heart, Britney is really a globe-tripping schizophrenic. Good to know.
As for Britney herself, from the couple interviews she’s done in the weeks leading up to the tour kickoff, she looks much better than she did in her GMA performances or Jimmy Kimmel appearances a few months back—thinner, livelier, almost unrecognizable in how recognizable she looks as the pre-crisis Britney of six or seven years ago. “I’ve been training for a while, and before I come to rehearsals, I’ve been working out,” says Britney by way of explanation. “I eat really clean.” (PopDust)
at 17.6.11