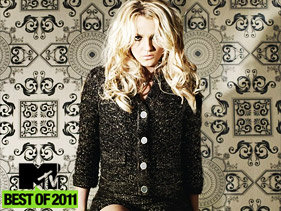 In 2011, we shuffled and shook it out. We found love and decided to dance until the world ends. We rolled in the deep and celebrated the boys with the booming systems. Shoot, at one point, we even went to Paris with Will Ferrell. It was, to say the very least, an interesting 12 months.

So, how else to sum up the year than with my picks for the 25 Best Songs of 2011: odes to partying and pumped-up kicks, songs of sadness and beauty, tunes about getting loaded and getting revenge. Pop, hip-hop, rock, bed-tronica, they're all here, and they're all important in some way, mostly because they all helped guide us through a rather tumultuous time. But that's enough from me, let's get to the songs. Oh, and I'd like to hear your picks too — drop me a line in the comments below. So now, on with the countdown.

#10. Britney Spears, "Till the World Ends": I have been accused (many times) of being a Brit basher and, sure, that's probably true, but not even I could deny this song. Super-charged star-burst synthesizers, robo-vocals and, of course, that iconic "Woah-Oh-Oh" chantalong, it's the party jam for the post-apocalyptic future. And because of all that, it's also an important song; not only a reminder that Britney is still capable of making truly terrific pop music, but that, really, she never stopped. And coming from one of her most ardent critics, that's high praise indeed.(MTV.COM)