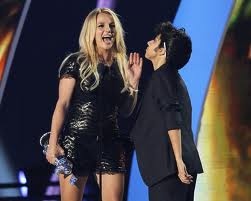 Remember that Lady Gaga (Jo Calderone) presented Spears with the Michael Jackson Video Vanguard Award live on stage at the MTV Video Music Awards, last month. At the time hose to continue her over the top schtick when the moment was supposed to be about Britney. Gaga, as Calderone, ended up winning me over by telling the crowd to "stand the fuck up" for Britney, adding that Spears had been a huge inspiration for her when she was struggling in New York playing small clubs. If that didn't settle the rumors of a feud between the two pop superstars, maybe this will. Spears was interviewed by AMTV yesterday, and when they asked about the Video Music Awards appearance and her opinion of Gaga in general.

"She’s hilarious. She was so into character, and really strong-willed. The way she portrayed herself, she exuded such confidence and uniqueness in her character — it was really crazy and fun. She comes from the theater, so she gets the background of not just coming out with a good song, which a lot of people do, but she understands the craft of being an entertainer. I think that’s why she appeals to so many people because they love to see what she’s going to do next and it’s so interesting, even for me, to watch her. She’s a character, she’s really cool.”
The 29-year-old Grammy winner is currently in England doing a round of promotional appearances for her latest hit album, Femme Fatale, and tour of the same name. Spears has also been spotted on the streets of London filming the music video for her new single, a mid-tempo, sultry song called "Criminal". The tune is quite a departure from Spears' other recent tracks, and my personal favorite off of Femme Fatale. While most of the album is upbeat and bubbly dance fun, "Criminal" reveals a different, darker side of the singer. Spears says she has had the concept of the video planned for awhile, but would divulge no details: "You'll have to see," was all she said. What a tease!