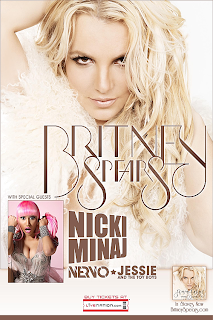 Females (and the notion of female empowerment) rule in Britney Spears’ world. In a recent video interview promoting her white-hot comeback album ‘Femme Fatale’ and the accompanying tour, Brit Brit is asked what artists dominate her iPod playlist and she quickly gives props to two fellow female pop stars.
“I love Adele,” Spears said. “Her voice is just an amazing soulful sound. Her voice stays with you. I love Robyn, her ‘Body Talk’ album is different and interesting.”
Brit also named Madonna, Whitney Houston and the inimitable Barbra Streisand as powerful female influences. While Madge and Whit are obvious inspirations, Babs was a bit of a surprise, and Brit said she appreciates the theatrical element of Streisand’s style.
She also revealed that she titled her new album ‘Femme Fatale’ because “it means empowerment and strong woman.”
Brit touches on working with will.i.am (“will is an original. He is very out there and he is so much fun to
be around so I am honored to have on the record”), how much she loves the ‘Til The World Ends’ video (because of the underground location and all the choreography), and the one time she was starstruck (it happened when she met Brad Pitt, when she promptly approached him and said hello!)
She also teases her upcoming ‘Femme Fatale’ tour with Nicki Minaj, saying it’s going to be “outrageously spectacular.” We’d expect nothing less from these two ladies.

HOW TO ENTER:
STEP 1: FIND YOUR CITY. Click inside to see a list of tour dates for this contest.
STEP 2: Click on the #JustJaredBritney hash tag next to your city and tweet the message that pops up!
STEP 3: TWEET MORE! The more times you tweet, the better your chances are to win that meet and greet with Britney. Rep your city!

NOTE: Winners will be chosen at random and they’ll be direct messaged the prize notification on Twitter so you must follow JJ @JustJared. One grand prize winner will be picked at random from the tour city with the most #JustJaredBritney[city] tweets. Enter as many times as you want to win! This contest ends Thursday, May 5, at 4:59 p.m. EST.
at 5.5.11